This event is presented with lead support from Stanford Live. Additional support is provided by the Moss Arts Center at Virginia Tech and Denison University, where Third Coast Percussion serves as an Ensemble-in-Residence. 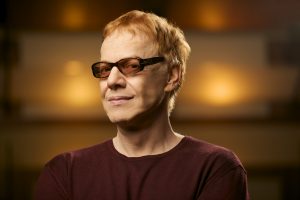 For over 30 years, four-time Oscar nominee Danny Elfman has established himself as one of the most versatile and accomplished film composers in the industry. Beginning with his first score on Tim Burton’s Pee-wee’s Big Adventure, Elfman has scored over 100 films, including:  Milk, Good Will Hunting, Big Fish, Men in Black, Edward Scissorhands, Batman, The Nightmare Before Christmas, Alice in Wonderland, Silver Linings Playbook, Avengers: Age of Ultron, Justice League, and The Grinch, as well as writing the iconic theme music for the television series The Simpsons and Desperate Housewives.

Before beginning his film scoring career, Elfman played in the Gamelan at Cal Arts (though he was never officially enrolled as a student), made a self-guided tour across Africa absorbing a diversity of musical traditions, worked with his brother Richard in an experimental musical theater group in France, and helped found the band Oingo Boingo. In recent years, Elfman has expanded his composition projects into the concert music world. His Serenada Schizophrana, commissioned by the American Composer’s Orchestra, premiered at Carnegie Hall in 2005, and Rabbit and Rogue, for the American Ballet Theater choreographed by Twyla Tharp, was performed at The Metropolitan Opera house in 2008.

Elfman’s Percussion Quartet  was written for Third Coast Percussion, to premiere at Philip Glass’s “Days and Nights” Festival in Big Sur, California in October 2019. In composing his first percussion piece for the concert hall, Elfman drew on the vast collection of instruments he has amassed in his studio over the years, as well as recorded samples of many of Third Coast’s unique instruments, including tuned metal flat bar and wooden slats. Its four movements loosely follow the structure of a traditional symphony, with a gentle, more lyrical second movement, and a dance-like third movement that combines the feel of a Shostakovich scherzo with sounds reminiscent of balofon and gamelan. Each movement maintains a steady energy while shifting rapidly between sounds, styles, and tempos, and Elfman’s distinct voice is clearly recognizable in a slightly warped harmonic language, and moments of playfulness, mystery, and drama.

What would you have paid to see this event? Help us continue to create high quality livestream events by making a donation today! Click here to donate.

You can also donate via Venmo or PayPal: @thirdcoastpercussion