Third Coast Percussion’s growth over the last 10 years has been pretty organic, but there have been a few landmark moments along the way when things really jumped up a notch. This month, we’re taking a look back at those big moments in TCP history.

Third Coast Percussion’s growth over the last 10 years has been pretty organic, but there have been a few landmark moments along the way when things really jumped up a notch. This month, we’re taking a look back at those big moments in TCP history.

Fall 2005: TCP has its first meeting with Augusta Read Thomas, to talk about how to go about commissioning composers. The group was just getting started, and we knew we wanted to get composers to write new works for us, but had no idea how to go about making that happen. We knew Augusta from Northwestern– she was on the composition faculty while we were all students there– and she was kind enough to meet with us to talk about the commissioning process. She asked us “are you guys a 501(c)3?” and we said “what’s that?”. We learned a whole lot that day, including how we would need to fundraise to support major commissioning projects. She also gave us some ideas of how to commission some younger composers in the mean time, which helped us launch our first commissioning project. The conversation went well beyond just commissioning, and helped us begin to understand what it would take to be a successful chamber ensemble. We had no idea at that time what an important collaborator, advocate, and friend Augusta would be for years to come!

February 2006: TCP plays a show at the Neo-futurarium Theater in Chicago. This was the first show where we really thought about the total concert experience, beyond the repertoire and performance. We thought about the stage set-up, lighting, and how to go seamlessly from piece to piece without moving instruments. It was a really positive performance experience for us, and we also learned some important lessons, like: you need liability insurance to self-present in a rented theater, and percussion quartets should try to avoid performing in second floor venues with no elevator.

Summer/Fall 2006: TCP gets its first professional recording, press kit, website and logo. A fellow NU alum named Ethelbert Williams saw some of our early shows, and was excited about what we were doing artistically, but thought we could use some help on the marketing and PR side of things. He graciously offered to help out, connecting us with a graphic designer and photographer, and helping us organize everything we needed to present a professional face to presenters, venues, and the press. Ethelbert is still on Third Coast Percussion’s board of directors today, and has continued to be a great advocate and supporter of our organization. These couple of months yielded our first EP recording, Ritual Music, professional press photos and press kit, an awesome website, and of course, our first logo: 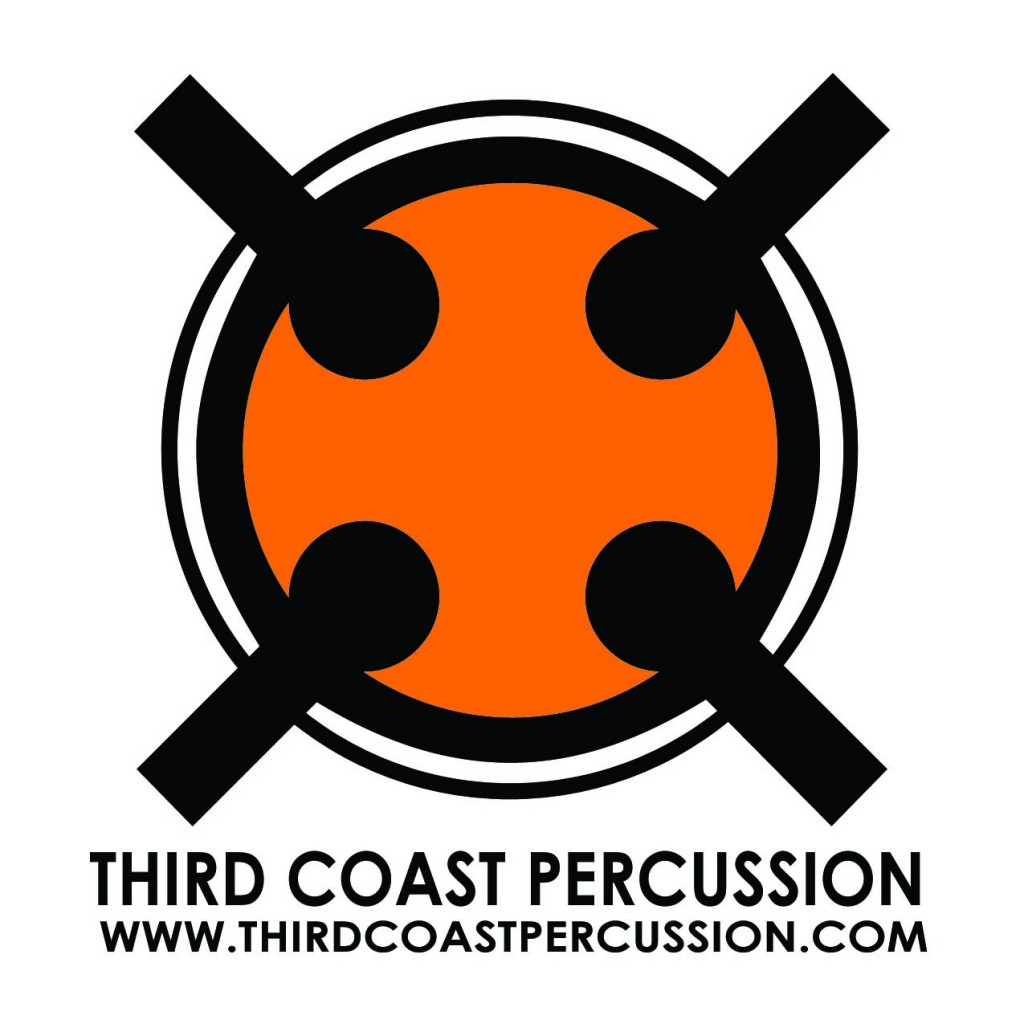 July 2007: TCP’s first performance at Rush Hour Concerts. This was the first concert we were actually hired to play, rather than self-presenting or performing pro bono. It was also the beginning of another very important long-term working relationship. TCP has performed on Rush Hour Concerts every summer since– we premiered a new work by our own David Skidmore on the season finale of Rush Hour’s 10th Anniversary Season (commissioned for the occasion)– and the two organizations have collaborated on a number of important community engagement and youth education programs in Chicago over the years.

Winter 2009: TCP’s first real tour. After a few quick run-outs here and there, this was our first substantial time on the road. We toured around the Midwest for about 10 days, performing at University of Illinois, Southeast Missouri State, University of Kentucky, and Tennessee Tech, then headed down to Texas for about 2 weeks, performing at a number of Universities and the Round Top Percussion Festival. We were all paying our bills with other teaching and performance work at this point, so it was a big deal to 1. figure out how to leave town for most of a month; and 2. actually generate some income from TCP (along with some expenses). It’s worth noting that this tour depended heavily on family and friends who put us up, and the enthusiasm of percussion professors who were willing to take a chance on a little-known quartet from Chicago. 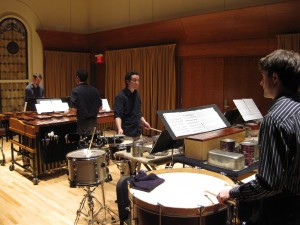 August 2009: TCP gets its first grant! We had finally become a 501(c)3 earlier that year, and we had begun renting a studio space in Chicago’s North Center neighborhood in 2008, both of which were game-changers in their own right. This first grant we received, from the MacArthur Funds for Arts and Culture at the Richard H Driehaus Foundation, changed things in a very tangible way. For the previous year, the members of TCP had paid the rent on the studio space out of our own pockets. The Driehaus grant provided enough funding to pay the rent on the space, marking the moment when the four of us got to stop paying to be in Third Coast Percussion. The MacArthur and Driehaus foundations are still very important pillars of support for TCP to this day, along with a number of other generous foundations and individuals you can read about here.

Summer 2011: Samir Mayekar returns to Chicago and becomes the chair of TCP’s board of directors. Like all non-profit organizations, Third Coast Percussion has a board of directors. Samir was one of our first board members when we incorporated, and when he returned to Chicago, to pursue an MBA at Northwestern’s Kellogg School of Business, it transformed the role that TCP’s board played. The board became much more independent, providing greater accountability for the four of us performers who were running the organization, and pressing us to make plans for where we wanted to be 5 years down the road. The board also began growing, as Samir and other board members actively recruited and networked to find other individuals who would be excited to join the team. Samir’s energy and dedication have set the tone for our amazing board of directors, which is now comprised of 13 people, including one ensemble representative. The enthusiasm of these individuals, who volunteer their time and support TCP financially, has been crucial to getting our organization to where it is today.

Fall 2012: Third Coast Percussion premieres Augusta Read Thomas’s Resounding Earth at the University of Notre Dame’s DeBartolo Performing Arts Center. Augusta had been a great friend and advocate of our ensemble since the beginning, and she approached us with an idea for a large scale work scored entirely for different kinds of bells, a sound that has been central to her work for many years. This piece marked a number of firsts for TCP: it was our first commissioned work by a world-renowned composer, our first performance at the DeBartolo Performing Arts Center, where we later established a residency position, the first work that required us to build an entirely new instrument inventory, our first fully-collaborative commissioning process, and our first major individual giving campaign, “Adopt a Bell,” in which many generous individuals made donations to support this project. Since the premiere, we’ve performed the full work about 2 dozen times across America and in Germany, performed extracted movements of the work over 100 times, recorded a CD/DVD of the work, and created a free iPhone app that allows the user to play the many different bells used in this piece and learn more about their origins. 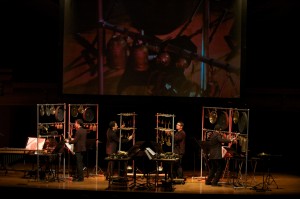 Summer 2013: TCP begins its Notre Dame residency and goes full-time! We had been pushing for many years to get to the point where Third Coast Percussion could become a full-time job for all four of us. Increased support from foundations and individuals, and a more rigorous touring schedule helped to make it possible, but beginning our position as Ensemble-in-Residence at the University of Notre Dame’s DeBartolo Performing Arts Center put it over the top, and convinced us that it was possible to resign from our other professional obligations as teachers and performers- which we also loved- in order to make TCP our full-time pursuit. Being able to dedicate all of our time to TCP helped things to take off from there! We’re now in the third season of our position at Notre Dame, and it’s been incredibly rewarding on many levels.

Winter 2015: TCP hires its first non-performing administrator, Liz Pesnel. After achieving the dream of working full-time for TCP, our next dream was to have extra help with the administrative work, so we would all have more time to dedicate to the artistic side of things. We were incredibly fortunate that our first administrative hire was someone so capable and hard working. Liz came on board in February 2015 as a part-time Office Manager, and jumped up to being our full-time Managing Director in summer 2015. Many of TCP’s big projects in the past year- including In C Chicago, Inuksuit at Notre Dame, and our upcoming European tour– would not have been possible without having Liz on our team!

More game changing moments to come! There are many more exciting things in TCP’s future; the organization will continue to grow and we will continue to push the bounds artistically. Many of the major landmarks above were empowered by generous individuals and foundations; this kind of support made the difference between the four of us paying to be in TCP or starting get paid to do the work that we do, the difference between TCP being a part-time project or a full-time career, and the difference between the four of us being the only employees of TCP or adding a staff position. Each of these steps has, in turn, allowed TCP to pursue a more rigorous performance schedule, and more ambitious artistic and educational projects. Click here to support TCP’s continued growth by making a tax-deductible gift this holiday season.