As part of our series of #TCP10 blog posts, the members of TCP talk about 10 things they’re most excited about during the 10th Anniversary Season.

As part of our series of #TCP10 blog posts, the members of TCP talk about 10 things they’re most excited about during the 10th Anniversary Season.

David: TCP is going on our first major European tour this season, which is pretty exciting. We’ll be playing Wild Sound, the major multimedia work we commissioned from composer Glenn Kotche, at a number of venues across the continent. 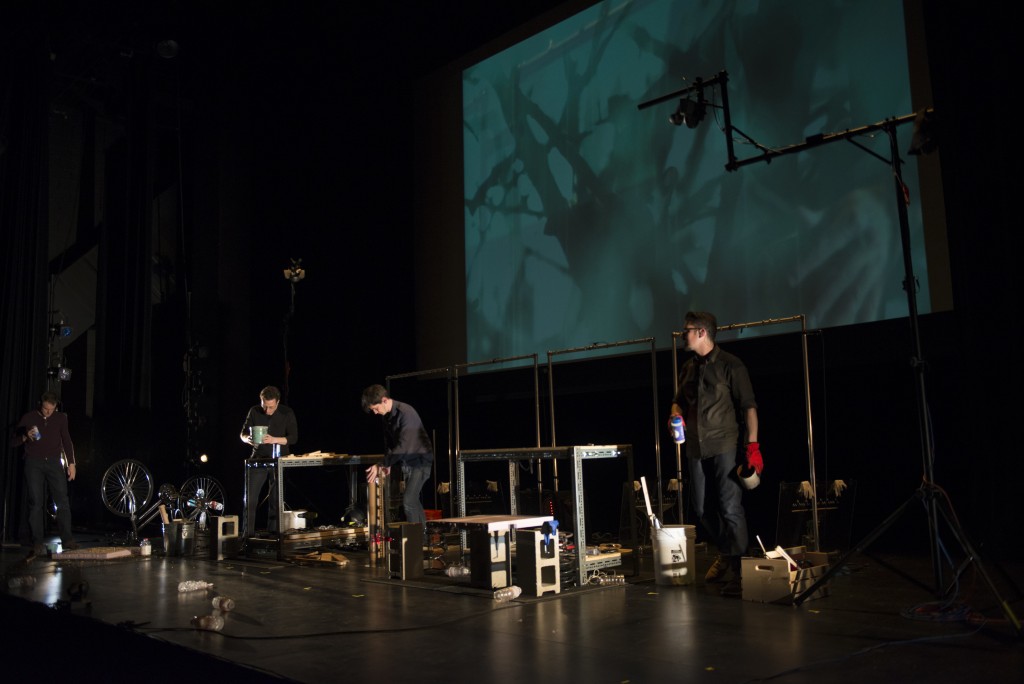 Rob: I’m looking forward to our 6th full-length album coming out in February, which is an album of Steve Reich’s music on Cedille Records. Reich’s music has always been an important part of our repertoire, and it’s great to put our own stamp on these important works. We’re also working on a new mobile app that goes with the album, so stay tuned for more details on that! I feel like our mobile apps are a really great way for people everywhere to have interactive experiences with the music we play.

Sean: I’m excited to be performing in Alaska for the first time as part of our residency with Juneau Jazz and Classics.  We’ll be taking part in a performance of John Luther Adams’ massive outdoor work Inuksuit, and I’m eager to experience that work in the landscape from which it draws inspiration. Plus, it would be amazing if we get to see a polar bear or a whale… 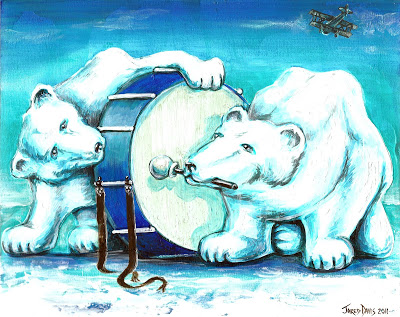 How Sean pictures our Alaska residency…

Peter: I’m excited for the opportunity to do some professional development with master Ewe musician and dancer Nani Agbeli again this season. This guy is just a ridiculous artist and it’s so nice to step out of our comfort zone and into a new culture and musical tradition. 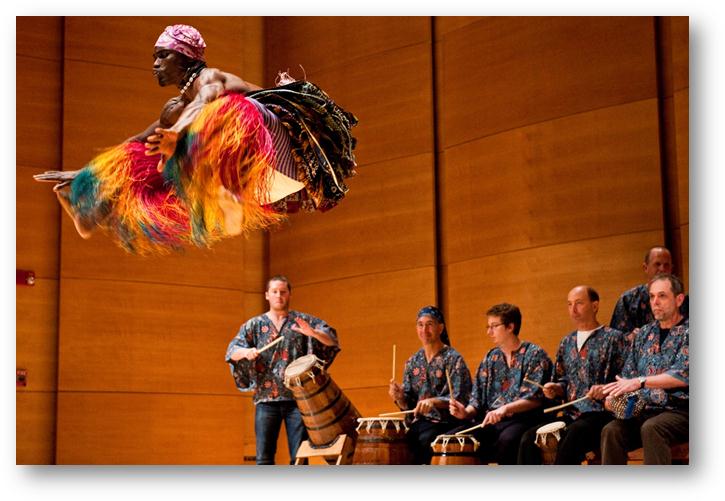 Sean: I’m very excited to find out who the next round of collaborators will be in our Emerging Composers Partnership.  We’ve already had two fantastic workshopping sessions with the two composers for this year, Danny Clay and Katherine Young, and we’ll know who the next round will be by the end of the calendar year.

David: Donnacha Dennehy is writing us a new piece for a panoply of drums scattered throughout the performance space. He’s dreaming up some really amazing new sounds for these instruments that are at the core of what we do as an ensemble. We’ll be performing the piece at Notre Dame, University of Chicago, and the Met Museum this winter! 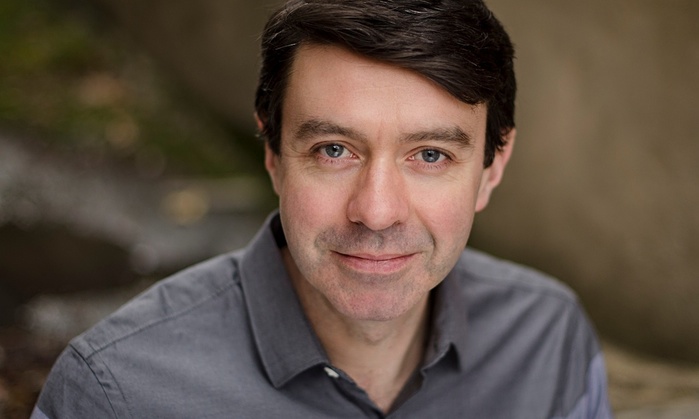 Peter: I’m really thrilled that TCP is going through its first financial audit.  While this may sound like “I’m thrilled to listen to Dave practice Bach on the Digeridoo”, I’m actually genuinely excited about it. I’ve been managing our finances for a very long time, and going through this process is just another milestone that showcases how far our organization has come. 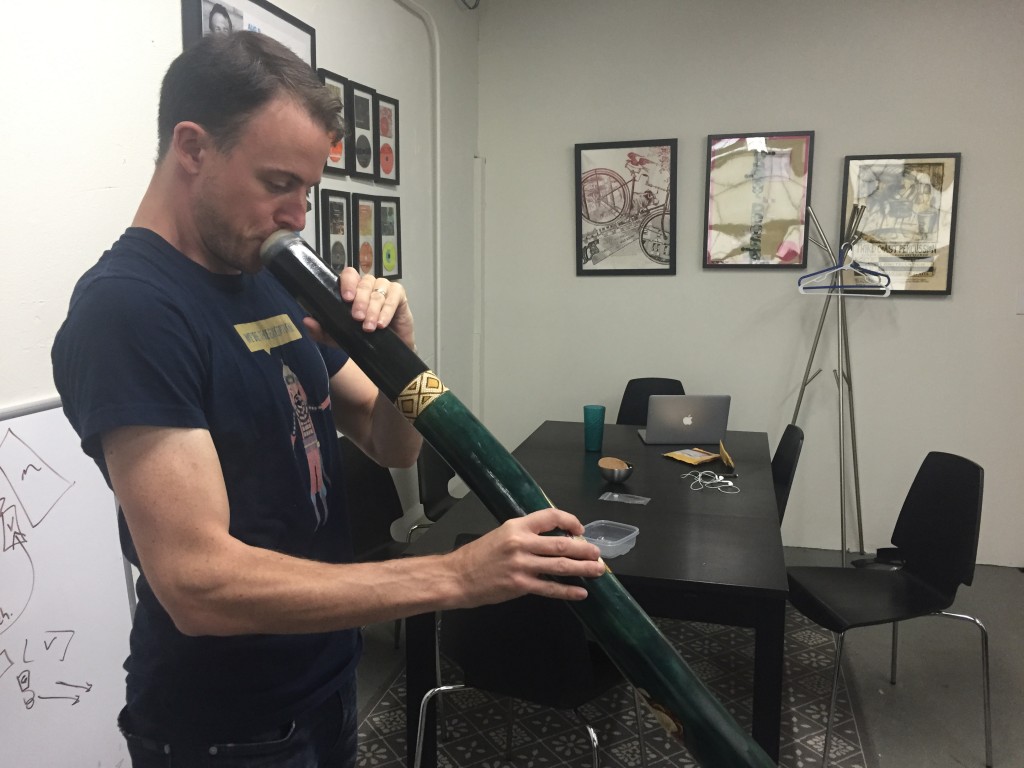 Dave practicing Bach on his Didgeridoo

Liz, TCP Managing Director: I suppose to start I am so happy to be here!  Being the ensembles first administrative hire feels pretty special to me. I’m looking forward to seeing how they grow over the next year (and beyond!) since I’ll be taking some administrative work off their plates. It might sound lame but thinking about ways I can give them more time to just keep being musicians is really exciting to me.

Rob: We’ve got a bit of a homecoming at Northwestern University this season. All four of us are NU alums, but we haven’t played a concert there since the first concert we ever played! It’s particularly exciting because we’ll be performing in their beautiful new concert hall, with views of the lake and skyline. The concert is part of Northwestern’s New Music Conference, and we’ll be working with NU composition students throughout the year. 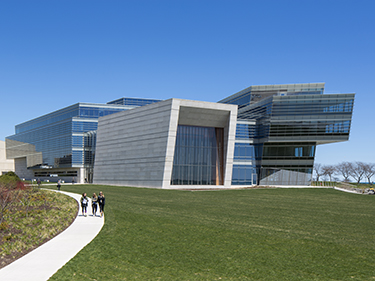 David: I’m really excited to be playing Steve Reich’s Sextet a few times this season. It’s one of my absolute favorite pieces to play, and we’ll be performing it with two killer pianists – Oliver Hagen and David Friend.

Click here to support TCP as we celebrate 10 years!

Next post: TCP10: Questions we get asked all the time »